A Recent Law and a New Arbitration Institution,

The history of arbitration in the Principality of Andorra began with two arbitration procedures in the years 1278 and 1288 which led to the signing, between the Bishop of Urgell and the Earl of Foix, of the Paréages which created the Principality. Despite this historical background and the fact that arbitration has been conducted in Andorra on an ad hoc basis ever since, it was only recently – on 18 December 2014 – that the Arbitration Law 47/2014 (the “Law”) was enacted, providing for state-of-the-art rules governing domestic and international arbitration.

This post provides for a succinct overview of the new Andorran legal framework on arbitration and of the recently created arbitration institution, theArbitral Tribunal of the Principality of Andorra (the “ATPA”).

Features of the New Andorran Law on Arbitration

The Law governs all commercial arbitration proceedings conducted in the Principality of Andorra but can also be applied to supplement any provisions found in specialized types of arbitration. The Law applies to both arbitration in law and arbitrationex aequo et bono and provides for a choice between ad hoc arbitration and institutional arbitration. As is usually the case around the world, the parties can choose to adopt specific rules, directly or by reference to an arbitration institution, which shall prevail over the non-imperative provisions of the Law.

Following the dualist model of the French legal system, the Law draws a distinction between domestic and international arbitration, although most rules, if not all, are common to both. Under Article 4.2, an arbitration is “international” when:

The legislators have decided not to lay down a comprehensive list of which matters can be referred to arbitration and have instead chosen to use a general formula which provides that can be submitted to arbitration any matters within the capacity of the parties to freely dispose of. However, according to Article 3.2, the Law does not apply to special types of arbitration such as employment and consumer arbitration, which are governed by specific legal provisions.

Among the provisions applicable to both domestic and international arbitrations, the following are worth mentioning, as being a little unusual:

Concerning international arbitration, defined under Article 4.2 following a classic mixed and comprehensive criterion, grounds for annulment of awards made in Andorra and for refusal to recognize and enforce awards made abroad (Articles 70 to 73) are very much in line with those found in the 1958 New York Convention. Also, it is worth noting that, pursuant to Article 67, if the parties wish the arbitration to be confidential, they must provide so expressly.

Creation of the Arbitral Tribunal of the Principality of Andorra

In accordance with the Arbitration Law, theArbitral Tribunal of the Principality of Andorra was created by the Law No. 13/2018, adopted on 31 May 2018. Completely independent from the public authority, this unique institution whose founding members are the Andorra Chamber of Commerce, Industry and Servicesand the Andorra Bar Association (www.tapa.ad) administers the arbitration cases entrusted to
it. These entities are responsible for the composition and functioning of the institution’s governing bodies. Furthermore, they are responsible for drafting the Arbitration Rules that will apply to the proceedings administered by the ATPA and for laying down its financial and accounting rules in accordance with the Law.

The ATPA’s governing bodies are the Assembly (“Ple”) and the General Secretariat.

The Assembly must be composed by at least seven members with the right to vote.

Three of them are appointed by the Andorra Chamber of Commerce, Industry and Services and three by the Andorra Bar Association. The six members of the Assembly must appoint a seventh member, to act as President.

The Law No 13/2018 ends with a chapter devoted to the financial and accounting rules and provides that the ATPA’s By-laws must address its financial regime.

The By-laws, found in Annex I of the ATPA’s Arbitration Rules, recall in their first chapter the institution’s legal nature, highlighting that it is subject to private law, benefits from legal personality and financial autonomy, and has full power to own and dispose of assets in pursuance of its aims.

The By-laws provide for a specific body, the Arbitral Board, to assist the Assembly and the General Secretary. This body is composed of five members: one appointed by each of the ATPA’s founding members; one member appointed by the Assembly who must have a renowned experience in arbitration matters and is independent of the founding members; the President and the General Secretary. The Arbitral Board has exclusive competence to administer the arbitration cases and, by delegation from the Assembly, to appoint or confirm the arbitrators as provided for in the Arbitration Rules.

In addition to provisions relating to the running of the ATPA by the Assembly or ad hoc committees, the By-laws provide an express clause precluding ATPA members to be involved, either as arbitrator or counsel to one of the parties, in any cases administered by the ATPA, unless expressly agreed by the parties and if it is not considered unproper by the Arbitral Board, in view of the circumstances of the case.

The By-Laws end with provisions relating to the appointment and requirements for being a member of ATPA and dealing with the independence and lack of conflict of interest of arbitrator. These provisions ensure that the ATPA operates in total neutrality as an institution and as an administrative body in the monitoring the arbitration proceedings entrusted to it.

The ATPA Arbitration Rules (https://tapa.ad/regulation/?lang=en) have been adopted by the Assembly and are in force since January 2021. Short and modern with only 27 provisions, they regulate the entire arbitral process.

The first title deals with the application of the Rules, notifications of disputes, and the calculation of time periods. The second title covers the start of the proceedings, i.e. the request for arbitration and the answer thereto, the effect of arbitration agreements, and third-party involvement in arbitration procedures. Article 6 makes it possible, at the Arbitral Board’s discretion, to consolidate proceedings conducted at the ATPA, even if they do not involve the same parties, and to have third parties joined in the proceedings.

Title four deals with the rules applicable to the procedure and to the merits, to the terms of reference, new claims, issues of proof, conservatory measures and the conduct of hearings. Article 10.4 entitles the arbitral tribunal to convene a meeting, after the first exchange of submission on the merits, to address issues which it considers in need of clarification.

The language provision found in Article 12 is another attractive characteristic of the Rules, as it allows the parties to submit documents or evidence in the four most spoken languages in the Principality – Catalan, French, Spanish and English – without having to provide a translation, unless otherwise decided by the arbitral tribunal or the parties. This results in time and money savings for the parties.

The fifth title lays down the form and effects of the award as well at the time limit for its issue which is 6 months as from the date of the signing of the terms of reference unless extension is granted by the Arbitral Board. A draft award must be submitted by the arbitral tribunal to the Arbitral Board which can require modification as to the form, not substance, but can also make any observations it deems necessary for the award’s effectiveness. It is worth mentioning that the late issue of an award will not affect its validity but that the arbitrators may be held liable for the delay.

Then, the parties have 30 days from the date of receipt of the award to ask the arbitral tribunal to correct or clarify one or more specific points of the award, to complete the award in respect of claims which have not been dealt with, or to rectify anyultra petita finding of the award. Finally, the last two titles lay down the rules on the costs of the arbitration and the waiver of the right to challenge the award.

As the ATPA was inaugurated, on September 30, 2021, and arbitration clauses referring to it have found their way in contracts recently, it should not be long before cases are brought before this new arbitration institution.

In conclusion, it can be said with confidence that with its modern arbitration law and arbitration rules, the Principality of Andorra, a country of multicultural and neutral background, offers an appropriate seat for arbitral tribunals and an appropriate institution, the ATPA, for the Andorran and international business community to resolve its disputes. 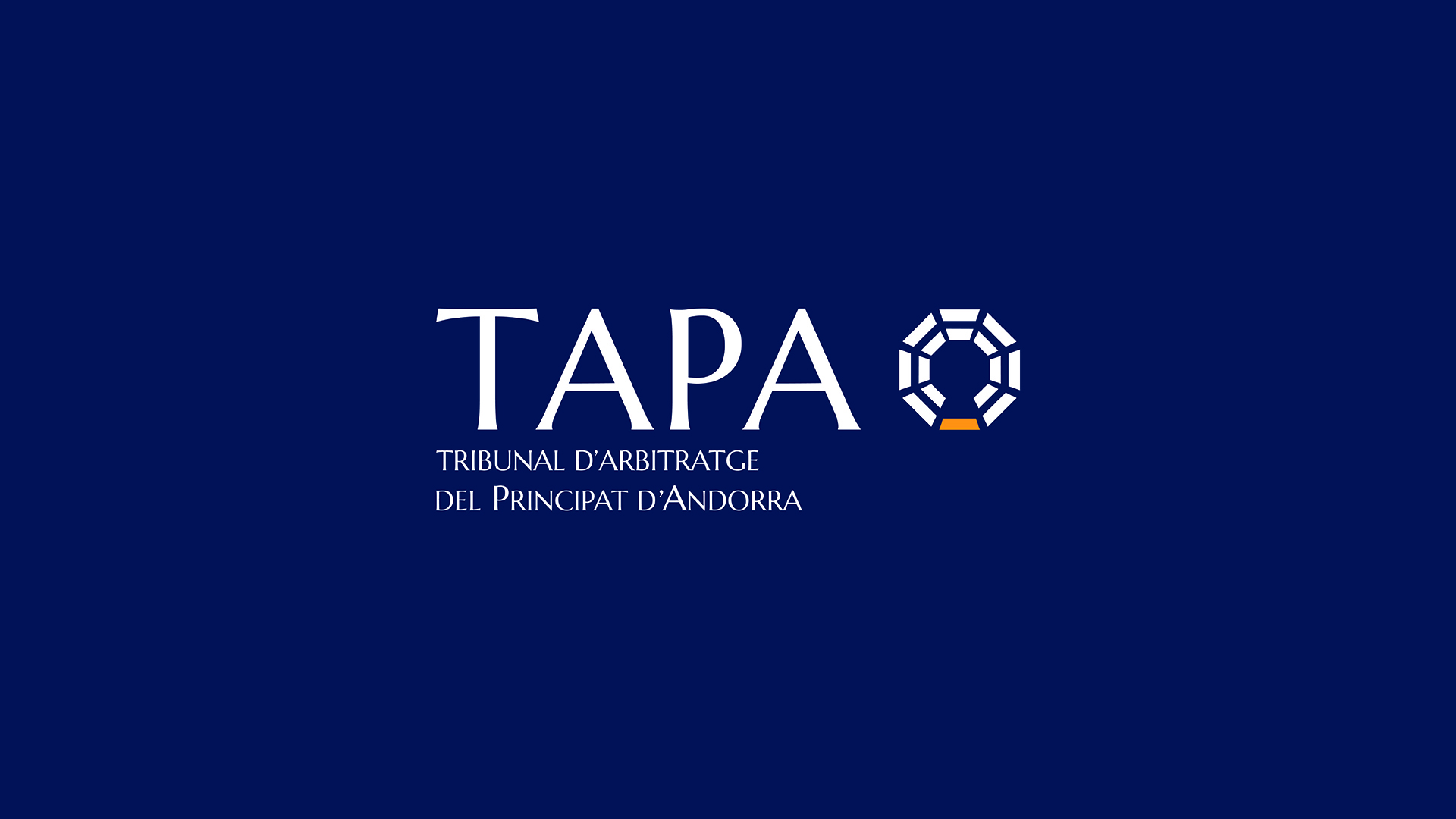